History and Location of Ojibwa Peolple 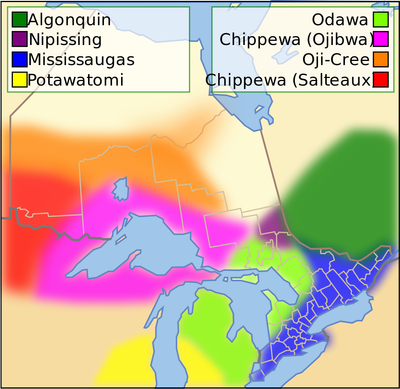 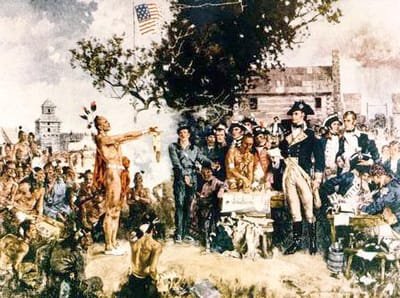 The Ojibwa (Chippewa) Natives lived primarily around the Great Lakes region near Lake Huron. The Ojibwa lived in both Canada and in the Upper Peninsula of Michigan. According to historians, about 70,000 to 105,000 Ojibwa lived in this area in the 1600's. After the arrival of Europeans, many Ojibwa people joined in alliance with other nearby tribes like the Potawatomi and the Ottawa. Many moved to the Great Plains and became known as the Plains Ojibwa. The Ojibwa traded with French settlers and would eventually join them in the French and Indian War from 1754 to 1763. The French would lose and their territory would be given to the British. The British forbade trade with the Ojibwa, which hurt their way of life.

In the Revolutionary War, the Ojibwa joined British forces in order to stop colonists from intruding upon their land. After the British were defeated, the Ojibwa were forced to give up most of their land in Michigan and were displaced. In 1830, The Indian Removal act was signed into law and the Ojibwa people split once again. Many moved to Canada, while some tried to keep plots of land given to them by the U.S. Government. Taxes were harsh on these plots, so many had to move to the "Indian Territory", which was located in Oklahoma and Kansas. By the 1860's, most native groups across the country were all relocated to this land.

In 2010, 112,757 Ojibwa were counted in the U.S. In 2001, 20,890 Ojibwa lived in Canada. Today, many Ojibwa still live on reservations and suffer many socioeconomic problems caused by gambling, alcoholism, and depression. Some Ojibwa returned to the states were their ancestors used to reside. These states include Minnesota, Michigan, North and South Dakota, and Wisconsin.

I BUILT MY SITE FOR FREE USING