Economy and Government of Past Ojibwa 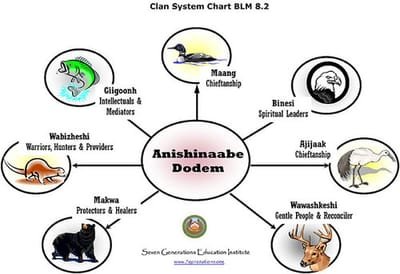 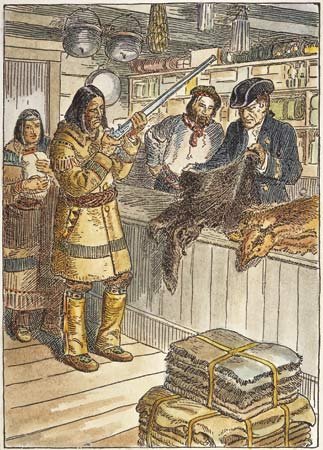 In Ojibwa culture, 21 clans exist, each with their own animal totem. There was a main emphasis on 7 clans that broke down their society into specialized classes. These clans were the Loon, Crane, Fish, Bear, Hoof, Martin, and Bird. The Loon and Crane Clans were the chieftain clans, which worked together to provide a balanced fair government. The Fish Clan was comprised of teachers and wise folk. They acted as a mediator if the two chieftain clans fought. The Bear Clan acted like scouts and police, who would survey the land on the outskirts of their village. The Hoof Clan were gentle people who cared for the community by making sure everybody had housing and recreational activities. The Martin Clan hunted, gathered, and protected their village from any invaders. Finally, the Bird Clan represented the spiritual people, and wished to reach the highest level of connection to the spirits, physically and mentally. With these seven clans working in harmony, The Ojibwa managed to remain very powerful. the clans support one another and created true order in their land.

The Ojibwa economy was simple and effective. They only hunted and gathered what the tribe needed. This change with French contact in the late 1600's. The fur trade began and changed the way the Ojibwa ran their economies. The focus shifted from food gathering, to beaver hunting. They primarily hunted beaver and didn't focus on anything else. In return, the Ojibwa did get firearms, which further strengthened their already powerful military. But food, clothing, and other basic necessities had to be bought from the French, which lead to more focus on beaver hunting. The Ojibwa became exploited by the French and forced themselves into a point were the only way to survive was beaver hunting.
I BUILT MY SITE FOR FREE USING